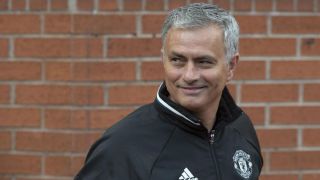 Jose Mourinho says his style of football at Manchester United will be more intense than his predecessor Louis van Gaal's.

The Dutchman attracted plenty of criticism for his focus on possession at the expense of expansive, risk-taking football and while Mourinho said he does not believe in any one particular type of philosophy, he will bring intensity back to United.

"Yes, we want to play different than the last season. Mr. Van Gaal is absolutely a top manager and his philosophy is very clear," Mourinho told MUTV.

"I am a lot more vertical, I am more intense. I like the ball possession as a way to create a chance to be vertical, I don't like it just to keep statistically possession of the ball.

But Mourinho says he is not going to drill home one specific style of play, instead saying he will be adaptable to whatever players he has and situations he faces.

"The style of play, the players have a huge contribution to that," Mourinho continued.

"I think one of my characteristics as a manager is that I can adapt to what I have in hand.