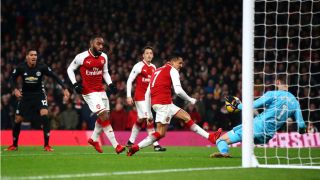 Jose Mourinho believes there are some players in world football a club must sign when the chance arises, regardless of circumstances, amid claims Manchester United have stolen a march on Manchester City in pursuit of Alexis Sanchez.

A reunion between Sanchez and his former Barcelona boss Pep Guardiola at City has long been touted, with the Premier League leaders reported to have tabled a £20million for the Arsenal star, who is out of contract at the end of the season.

But stories broke ahead of Mourinho's Friday media briefing that City were unwilling to meet Arsenal's £35m asking price for Sanchez, opening up the prospect of a lucrative switch to Old Trafford for the Chile international.

The United boss was keen not to be drawn on specifics regarding a player he labelled as "phenomenal" but conceded there were times when his reluctance to engage in the January market must be abandoned.

"I don't know if it is ethical or correct to be speaking about players of other clubs," Mourinho told reporters ahead of Monday's Premier League meeting with managerless Stoke City.

"If someone speaks of one of my players to say they are interested or not interested I would not be very happy.

"Sanchez is an Arsenal player. I don't know, but probably this weekend he is going to defend Arsenal colours so I do not think it is correct to say thing about Alexis Sanchez.

"At the general level, I can tell you that myself and the Manchester United owners, we do not believe a lot in the January market. We do not believe in signing a player just to do something.

"We don't believe in that. What we believe really is that there are some players in the football world, if you have a chance to sign them, it doesn't matter if it is January, March or July. You have to try and that's it.

"In relation to Alexis Sanchez, I don't say a word. The only word I can say is the what everyone says - he is a phenomenal player. But he is an Arsenal player."

“Zlatan Ibrahimovic is injured, or is not totally happy with his condition,” Jose says. “The date for him to be back in training is around the end of January or the beginning of February, so let's hope his feelings are better and we have him as soon as possible.” January 12, 2018

Another factor that could persuade Mourinho to seek attacking reinforcements this month is another fitness setback for Zlatan Ibrahimovic.

The veteran Swedish striker returned ahead of schedule from cruciate knee ligament surgery in November but has not featured since United's 2-2 Boxing Day draw against Burnley and is now likely to be out until next month.

"Zlatan Ibrahimovic is injured, or is not totally happy with his condition," Mourinho added.

"The date for him to be back in training is around the end of January or the beginning of February, so let's hope his feelings are better and we have him as soon as possible."