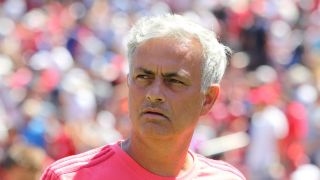 Manchester United manager Jose Mourinho hopes to sign two new players but is not sure the opportunities will arise.

United have added Brazil midfielder Fred to their squad for the 2018-19 season, along with teenage full-back Diogo Dalot and goalkeeper Lee Grant, who is set to serve as a back-up to David de Gea and Sergio Romero.

Anthony Martial has been linked with a move away from Old Trafford, while Harry Maguire, Miralem Pjanic and Ivan Perisic are among United's reported targets.

Although Mourinho was not giving anything away, the United manager hinted he is not fully satisfied with the club's transfer business.

"I would get two more players."

United's strength in depth could be tested further due to the injury suffered by Antonio Valencia in the friendly draw with San Jose Earthquakes.

Mourinho confirmed the right-back will miss much of the club's pre-season campaign out of precaution, given that Dalot is out until September and Matteo Darmian has been tipped to return to Serie A.

"I don't think he will be available to play any one of the three matches of the International Champions Cup," Mourinho said of Valencia, who is expected to be named Michael Carrick's successor as club captain.

"It's not a moment to take any risks. Antonio is a player that's not a young boy anymore. We have to take care of him and to try to have him ready for the start of the season.

"We bought a fantastic player [in Dalot]: young, 19 years old, but I think probably the best right-back at that age in European football.

"But he had a surgery last May and is recovering for that, so one more reason to take care of Antonio."

United face AC Milan, Liverpool and Real Madrid in the International Champions Cup before a friendly match against Bayern Munich.

They then get the 2018-19 Premier League season underway on August 10 against Leicester City.