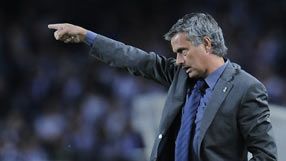 There had been speculation the Portuguese coach would drop playmaker Mesut Ozil and pick a third defensive midfielder to counter Barca's possession-based game, but Mourinho said he had no plans to change his tactics.

"We won't change our working methods for Barcelona or anyone else," Mourinho, a former Barca assistant coach, told a news conference in Madrid before flying with the squad to the Catalan capital.

"Barcelona may be better than other teams in La Liga but we have the same respect for all," he added.

Monday's clash at the Nou Camp will be a first major test of Real's resurgence under Mourinho, who was hired from Inter Milan at the end of last season and charged with ending Barca's two-year reign as Spain's top side.

Unbeaten in all competitions, Real lead La Liga having won 10 and drawn two, but the first of the season's two "clasicos" could help decide the destination of the title.

Mourinho's Barca counterpart, Pep Guardiola, played down the importance of the match, which will be watched by millions around the world, saying it would not be "decisive".

He said he did not expect many surprises, with Barca planning to take the game to Real and the visitors trying to surprise their hosts with swift counterattacks.

"They know how we play so the match is quite predictable in that sense," Guardiola told a news conference at the Nou Camp.

"We are going to go after them and they know that," he said, adding that Barca would be trying to get world player of the year Messi involved as much as possible.

"He loves to play this kind of game," Guardiola said of the Argentina forward.

"Tomorrow we will try to play fast and quick and to try to find him many, many times."

Mourinho also tried to play down the significance of the game, saying it did not inspire him as much as a Champions League match.

"I don't have the same adrenaline rush I get in the Champions League knockout stage, in which failing to win implies you'll watch the next game at home on the TV," he said.

"My team is psychologically strong enough to lose tomorrow and continue having faith in itself and winning games without getting overexcited.

"I don't want our self-esteem to change if we win or lose tomorrow. I will remain calm after the match whatever happens."

Real are aiming for their first win over Barca in four games since Guardiola took over.