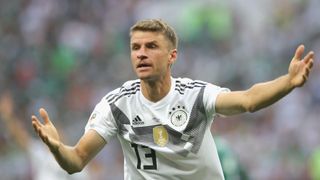 Thomas Muller acknowledges Germany have no further margin for error at Russia 2018 but dismissed the notion of complacency being a factor in the shock 1-0 loss to Mexico.

Juan Carlos Osorio's side tore into the world champions at the Luzhniki Stadium and should arguably have had more to show for their efforts than Hirving Lozano's 35th-minute winner.

"We now have to win both games and are under extreme pressure. And if we want to do that positively then we need character," the Bayern Munich forward told reporters.

"We do not have to change the attitude. It's not that we do not want to, but sometimes we did the wrong things at the wrong time."

Moment of the DayWhen scored against the reigning champions to give a dream start to Russia 2018Highlights TV listings June 17, 2018

Germany's vulnerabilities in the transitions were a standout feature of the first half, while Joachim Low's men also suffered problems against the counter-attack during their pre-tournament friendlies.

"Of course you can secure [the defence]," he added. "There are ball losses in the wrong moments that hurt us.

"We will continue to analyse the situation with the coaching team and then try to stop it. We have to show what we can do in the next games."