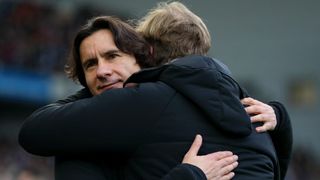 Replacing outgoing Arsenal manager Arsene Wenger with Liverpool assistant Zeljko Buvac would be a "ridiculous" appointment, according to Danny Murphy.

Wenger is set to leave Arsenal at the end of the season and Buvac has emerged as a shock candidate to succeed the long-serving Frenchman at the Emirates Stadium in 2018-19.

Buvac – who will not be involved with Liverpool's first team for the remainder of the season as the Premier League side prepare for the Champions League final – served as Jurgen Klopp's assistant at both Mainz and Borussia Dortmund, while the 56-year-old has worked alongside the German throughout his time at Anfield.

But former Liverpool midfielder Murphy – dismayed by the reports – dismissed Buvac's ability to step into the role.

Murphy added: "Just because you haven't been a number one doesn't mean you don't succeed. There are exceptions to the rule.

"But we're not talking about a job in the Championship or League One here. We're talking about Arsenal Football Club who want to get back to competing with the big boys.

"There's a hell of a job to be done there. If you bring a coach in who knows he's not buying the players, like Chelsea in some respects, then that's fine.

"My problem with someone who's not been a number one is when you get problems with players. If you look at Arsenal and Alexis Sanchez, for example, in recent times or whatever goes on on the training pitch.

"If you're not used to dealing with that, it can escalate quickly. It's a completely different role."