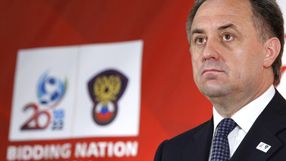 "There's a certain philosophy in FIFA, that is to open new frontiers and broaden the horizons," Mutko, who also sits on FIFA's executive board, told Reuters in an interview at his ministry's headquarters in central Moscow.

"Soccer is the world's most popular sport, therefore it must leave a long-lasting legacy for a World Cup host," he said, pointing to this year's event in South Africa. "I think from that point of view Russia has a big edge over its rivals."

Mutko would not call Russia a favourite, however, saying it faces "very tough competition" from England and joint bids from Spain/Portugal and Belgium/Netherlands.

"There's no denying that England has all the football tradition, the infrastructure, stadiums, etc but it has already hosted a World Cup (in 1966).

"Spain is a beautiful country, it won the last World Cup but it also hosted one (1982). Belgium and Netherlands also staged a major event (co-hosting Euro 2000) recently," he said.

"On the other hand, Russia or the whole of Eastern Europe for that matter, has never hosted a World Cup. And we need one in order to improve our infrastructure, to build the stadiums, to make us a real football country. This is what it's all about."

Mutko conceded that Russia also had its shortcomings.

"We have our minuses, just like all the other candidates," he said. "Our risk zones are the (insufficient) infrastructure, transport and (lack of modern) hotels and airports.

"But Russia is a dynamic country with huge economic potential and no one should have any doubt that everything would be built on time."

Russia's bid has been criticised over transport and infrastructure while England's has come under fire over training venues and team hotels.

FIFA has also criticised the idea of co-hosting the finals with Spain/Portugal and Belgium/Netherlands mounting joint bids.

FIFA's ethics committee is due to announce its verdict on Thursday on two members of the executive committee, Nigeria's Amos Adamu and Reynald Temarii of Tahiti, over allegations they offered to sell their votes.

"Of course, it has affected our image," Mutko said.

"If you look back in history, such allegations are nothing new. Since the dawn of civilisation one can find corrupt officials, no society is immune to that.

"But as a member of the FIFA executive you should have a certain image of yourself. I don't think anyone would try to approach people like (committee member) Franz Beckenbauer or (UEFA president) Michel Platini.

"But despite what's been said and done I strongly believe it (the scandal) will not affect the (World Cup) vote," he added.