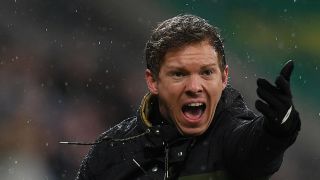 Nagelsmann became the youngest coach in Bundesliga history when he took over from Huub Stevens at the Rhein-Neckar-Arena in February 2016 aged 28.

He steered Hoffenheim away from the Bundesliga relegation zone and followed up that feat by securing a place in the Champions League qualification play-off round in his first full season at the helm.

Sule played under Nagelsmann in Sinsheim until joining Bayern ahead of this season, a path the young coach has been tipped to follow in the future, and the pair will go up against one another at the Allianz Arena on Saturday.

The Bayern defender lauded the ability of his former boss and believes Nagelsmann's passion for the game is key to making him so innovative on the training pitch.

"Julian is a very meticulous coach with an incredible amount of knowledge. A tactics freak, I would almost say," Sule told Omnisport and Goal.

"Sometimes in training you feel like you are in school, because you have to think very hard. But he improves the team incredibly, because he makes training exercises that I did not even know before.

"Always something of his own, always something new. I think he has a lot of fun with that, maybe also to invent a new exercise. But that comes from the fact that he loves this game incredibly and has a great knowledge about the tactics of the game."

The Bayern defender also spoke highly of Nagelsmann's approach on a personal level, while acknowledging his relative youth can still be witnessed on occasion.

Sule said: "As a man, I must say, he is also an outstanding coach who responds to the team, who talks to the team.

"But of course he is very young in his head ...I've known Julian since he was 23 and I have to say that he is still a bit like a young player from time to time, where he likes to shoot on the goal without warming up and he is always joking.

"He is really a top coach."