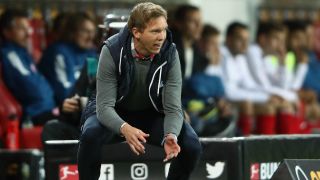 Hoffenheim head coach Julian Nagelsmann has distanced himself from speculation suggesting he could replace Carlo Ancelotti at Bayern Munich.

Bayern's hierarchy reportedly view the 30-year-old as a long-term managerial prospect and the Bundesliga champions could ramp up their interest following the dismissal of Ancelotti on Thursday.

Nagelsmann has won widespread admirers since taking charge of Hoffenheim in February 2016, steering the club clear of relegation two seasons ago and defying expectations to achieve European qualification last term.

But while he has previously spoken of his affinity to "home" city Munich, Nagelsmann is playing down links to Bayern.

"Do not include me in the speculation," Nagelsmann told Sport1 ahead of Hoffenheim's Europa League clash at Ludogorets.

"My media department has kept everything away from me."

Hoffenheim have won four of their six league matches this season to sit second, one point ahead of Bayern.