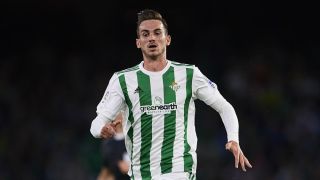 Napoli have announced the signing of Spanish midfielder Fabian Ruiz from Real Betis after triggering his reported €30million release clause.

The move had been mooted for several weeks, with Napoli said to have identified Fabian as a primary target in the event of Jorginho leaving after impressing in his first full season in LaLiga.

Still just 22, Fabian forced his way into the first team last term, catching the eye with the ability to produce both creative and combative performances.

With Jorginho expected to join Manchester City, Fabian said in June that a move to Napoli was likely and both clubs confirmed the transfer had been completed on Thursday as he signed a five-year deal.

A Spain Under-21 international, Fabian has just one full season of top-flight football under his belt.

He played 34 times in LaLiga during the 2017-18 campaign, scoring three goals.