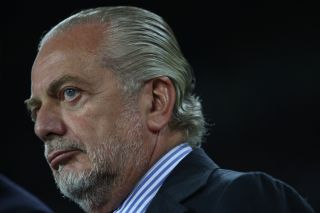 Napoli are looking to stockpile defenders and a midfielder, De Laurentiis said, with the Naples club likely to be in Europe heading into January - either in the Champions League or Europa League knockout stages.

De Laurentiis said Napoli will be looking to use the money made from the sale of Edinson Cavani to Paris Saint-Germain in the off-season come the transfer window in January.

"We have a defender, a full-back and a midfielder on our list if we can find them," De Laurentiis told Radio Kiss Kiss Napoli.

"I have put my money to one side for these signings who we have already outlined. There are situations that could help us improve the squad."

De Laurentiis recently criticised the prizemoney on offer inthe Champions League, but hailed the man who has won Europe's illustrious title with Liverpool in 2004-05.

"I won the lottery with Benitez," he said.

"He is managing the squad in the best way possible."