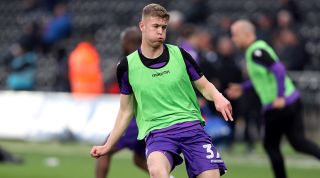 The 18-year-old has made just three Championship appearances for the Potters this season but impressed his Scotland international team-mate.

Fletcher departed the bet365 Stadium at the end of the season as his contract expired, and has been linked with a backroom role at his former club.

According to a report in the Daily Mail, Ole Gunnar Solskjaer’s side will make a move to sign Collins on the 35-year-old’s recommendation.

Solskjaer is keen to freshen up his squad with young talent and the Republic of Ireland Under-17 international fits the bill.

The centre-back made his senior debut for Stoke as a substitute against Swansea in April before starting for the first time in a 1-0 defeat to Middlesbrough 10 days later.