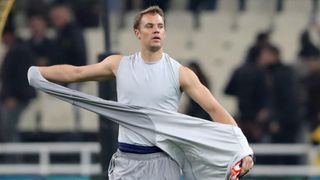 Bayern Munich's four-game winning run was halted by Freiburg on Saturday, but an unwanted streak continued for goalkeeper Manuel Neuer.

Lucas Holer's 89th-minute equaliser at the Allianz Arena earned Freiburg a 1-1 draw and means Neuer has now conceded eight goals from the last eight shots on target he has faced in the Bundesliga.

The Germany international goalkeeper was not helped by centre-back duo Niklas Sule and Jerome Boateng, who switched off and allowed Holer to get between them and cancel out Serge Gnabry's opener.

Scrutiny of Niko Kovac's position is likely to intensify as a result, with Bayern now four points adrift of leaders Borussia Dortmund, who they face at Signal Iduna Park next weekend.