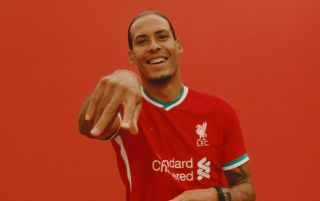 Liverpool have released their new home kit for the 2020/21 season, their first ever with new sponsors Nike.

The reigning Premier League, Champions League and World Club Cup champions will wear the new strip in for the first time in a competitive game when the top flight resumes on September 12.

Nike has also released a series of training gear to complement the home shirt release, with the jackets in particular likely to prove popular with Reds fans.

The kit features the traditional red, although in a slightly brighter shade than has been seen in recent years – in a nod to the "youth and vibrancy" of some propsects in the Liverpool squad – with the usual white trim, and the addition of teal, normally only found on the club's crest. It is finished off with a '96' emblem on the nape of the neck, in reference to the Liverpool fans who died in the Hillsborough tragedy in 1989.

The full kit will also have red socks and red shorts – a mainstay since their introduction under legendary manager Bill Shankly in the 1960s.

The new shirt has been modelled by captain and FWA Footballer of the Year Jordan Henderson, defender Virgil Van Dijk, and teenage prospects Harvey Elliott and Curtis Jones. Van Dijk, who was named Player of the Season in 2018/19, said that "Stepping out as champions next season in this kit will be really special.”

We also got our first glimpse of the new goalkeeper shirt, with Reds' No.1 Alisson Becker – although this is not on sale yet. It is primarily black – a style apparently favoured by the Brazilian shot-stopper – and similar to recent Liverpool goalkeeper jersies that have proved enormously popular with fans on Merseyside.

Nike have already produced a number of shirts for next season, with the likes of Barcelona, Inter, Roma, PSG, Tottenham and Chelsea already on sale – as well as Mexico's Club America, a particular favourite in the FourFourTwo office.