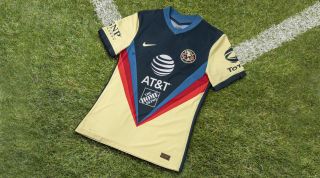 Fair play Nike - you've been knocking it out of the park this summer.

Here at FourFourTwo, we've been massively impressed with the American sports giant's work for Roma, Barcelona and Atletico Madrid - not mention the Savile Row-inspired Chelsea clobber, which the Blues have already been wearing on the pitch.

But the new efforts for Mexican outfit Club America might just be their best yet. The Eagles' new shirt is inspired by the club's decade of glory, in which they reigned supreme over Mexico. Nike claims that they've captured the mystique, passion and greatness of the club, and frankly, we agree.

There's a V-neck finish - for all you v-neck fans - while the inner back features the phrase “El más grande” in blue. That means “The biggest”, at least according to Google Translate.

“I love this kit. It is such an honor to wear the club emblem, I feel proud,” says midfielder Jennifer Munoz of the Club America women's side of the shirt. The away shirt for is actually an inverted version of the original, too - since you can't have enough of a good thing.

Club America didn't win the Apertura or the Clausaura last season. Not that we watch that much Mexican football - OK, any Mexican football - but we're blaming it on the fact that the shirts featured more of a zig-zag V-pattern on the chest, which didn't look as cool as this.

This shirt also has a Corona sponsorship on the back. No COVID jokes, please.

The Club America home shirt is already available to buy on the Nike website - as is the inverted away. Whether you're planning to wear it to the Azteca for a game or you just want a shirt that none of your pals own - it's certainly more out-there than buying the latest Real Madrid shirt - it definitely has our seal of approval.

While you're at it, check out the 'Football Top' that Nike have produced for CA, which features the club's badge blown up bigger on the shirt. Who knew Mexican football clubs had so much swag?