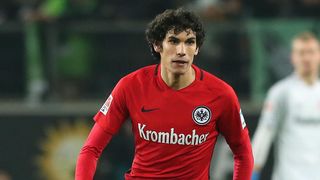 Real Madrid defender Jesus Vallejo, who has been billed as the new Sergio Ramos, must wait until the end of the season to discover the club's plans for him.

Vallejo, who joined Madrid from Real Zaragoza in 2015, is on loan with high-flying Eintracht Frankfurt in the Bundesliga.

The 20-year-old has been tipped to replace Pepe in the first-team squad at Santiago Bernabeu next season, but will not hold talks with Zinedine Zidane's side until the end of 2016-17.

"Nobody has informed me so far, they are just rumours," Vallejo told Sport1 when asked about replacing Pepe.

"When I went to Frankfurt, I was told that I should play the season calmly and make the most of it, then we sit down. We will not talk about it before May or June.

"Of course, we are in touch a bit. The club is following my development, which is quite normal, but I have not [spoken to Zidane] and I do not know him personally yet.

"I have more contact with the medical team and the scouting department. From time to time, some of them come to Germany to watch my games."

Vallejo, a Spain Under-21 international, acknowledges Ramos is a role model, but feels such comparisons between him and the Madrid captain are premature.

"Oh, I still lack a lot," he said of how he compared to Ramos.

"When I was a little boy and went to La Romareda I always looked up to Gabriel Milito and also Alberto Zapater because I played in my first youth years in midfield like he did.

"Today, of course, I am focusing on Sergio Ramos, but not just on him, on all the good central defenders – especially those of Real Madrid who are the best in the world."

Vallejo has played in every match as Frankfurt have risen from a 16th-place finish last season to sit third and in contention for Champions league qualification.

And the centre-back would not rule out staying for another season at Frankfurt if they make it to Europe.

"That should be discussed in summer," he said. "I can only say that here I am having one of the best experiences of my life.

"Therefore, I do not completely exclude the option of remaining a year longer because the team is playing well and I am developing well.

"Everyone at the club received me very well from the first day and made everything easier. I also like the city, I feel very comfortable in Frankfurt.

"[Head coach Niko Kovac] is also very important, a great help. He always tells me that I should not rest on my achievements, but I have to improve on a daily basis.

"He is very challenging in training and much of our success is due to him."