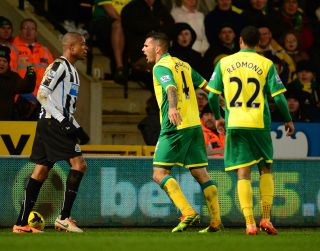 The French striker, on loan from QPR until the end of the season, was shown a red card for an off-the-ball incident with Bradley Johnson nine minutes from time.

Norwich appealed the sending off of Johnson on Wednesday and Newcastle have followed suit a day later, announcing the decision on their official website.

"Newcastle United can confirm that the Club has lodged an appeal with the Football Association for the wrongful dismissal of Loic Remy during Tuesday's Barclays Premier League fixture with Norwich City at Carrow Road," the club said.

"Remy was given a straight red card by referee Chris Foy in the 81st minute of the game following an incident involving Norwich City's Bradley Johnson."

As it stands, Remy faces a three-match suspension for the red card and would miss Sunday's Tyne-Wear derby against Sunderland.

Newcastle manager Alan Pardew described the dismissal as "silly" and criticised Johnson for his reaction to the incident after the match.

"There was a lot of pushing and shoving and they both raised their hands," he told the club's official website.

"They both then had their heads meet, and that was probably enough for the referee.

"But Johnson should be ashamed of his reaction because he never got head-butted. He threw himself away and when he does that, you know they are both getting sent off.

"If he hadn't done that then maybe the referee books them."