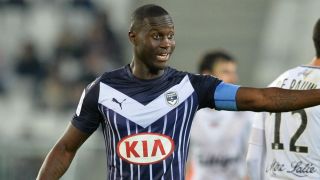 Newcastle United have completed the signing of Senegal midfielder Henri Saivet from Bordeaux on a five-and-a-half-year deal.

Saivet has joined Newcastle for an undisclosed fee, becoming their first signing of the January transfer window.

"I am very happy to be here at Newcastle," Saivet told the club's official website. "I am really proud to be able to play for this club, and I am really excited at the challenge that lies ahead.

"St James' Park is a really impressive and special stadium. In France there is nothing that compares to this, and I can't wait to get out there with my new team-mates and help the team climb the table."

Saivet arrives on Tyneside having been labelled Bordeaux's "most important player" by coach Willy Sagnol, who confirmed a deal was in place between the two clubs earlier on Monday.

The 25-year-old, who can operate on the wing as well as in the centre of midfield, made 178 appearances for Bordeaux and scored 23 goals.

And Newcastle head coach Steve McClaren is confident Saivet can adapt to the rigours of the Premier League.

McClaren said: "This is someone with a very good mentality, who is a tough player and a winner.

"Those are key qualities you need in the Premier League and we are looking forward to seeing him pulling on the Newcastle United shirt."

Newcastle have also been linked with Swansea City midfielder Jonjo Shelvey, although McClaren would not be drawn on speculation surrounding the England international in his pre-match press conference ahead of Tuesday's clash with Manchester United.