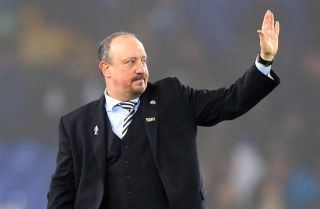 Newcastle have begun their search for a new manager amid a furious backlash from fans after announcing Rafael Benitez will leave the club at the end of the month.

The Magpies made their announcement on Monday after failing to reach an agreement with Benitez over a new deal, with fans responding by ramping up the pressure on club owner Mike Ashley.

A world class manager. A manager who performed so well in very difficult circumstances. A manager who understood the fans. Thanks and good luck @rafabenitezweb you were brilliant for the Toon. #SHAMBLES— Alan Shearer (@alanshearer) June 24, 2019

In a statement, Newcastle said: “It is with disappointment that we announce manager Rafael Benitez will leave Newcastle United upon the expiry of his contract on 30th June 2019.

“We have worked hard to extend Rafa’s contract over a significant period of time, however, it has not been – and will not be – possible to reach an agreement with Rafa and his representatives.

“We would like to thank Rafa and his coaching team for their efforts over the last three years and their significant contribution to what has been collectively achieved.

“We would also like to thank our supporters, players and staff for their patience during a period of uncertainty. The process to appoint a successor will now begin.”

Disastrous.Those ‘at the top’ of our great club should be ashamed. The great shame is that they won’t be.— antanddec (@antanddec) June 24, 2019

Television presenters and lifelong fans Ant & Dec also reacted with dismay on Twitter, claiming Benitez’s departure was “disastrous” and urging Ashley to get out of the club.

The future of Benitez, who has spent just over three years in charge at St James’ Park since replacing Steve McClaren in March 2016, has been gathering momentum for the past 12 months.

There were no signs of the Spaniard and the club edging closer to an agreement as his contract entered into its final year.

Newcastle made Benitez a new offer but were unable to give the former Valencia, Liverpool, Chelsea and Real Madrid boss certain assurances.

Benitez wanted greater control of Newcastle’s recruitment process, including the freedom to sign the players he wanted regardless of their age or potential resale value.

Rafa Benitez is to leave @NUFC. Awful news for the club and their fans.— Gary Lineker (@GaryLineker) June 24, 2019

The Spaniard guided Newcastle back to the Premier League at the first attempt in 2017 and has kept them in the top flight for the past two seasons on a shoestring budget.

His exit next week could have further repercussions as several players may now feel their future no longer lies on Tyneside, with striker Ayoze Perez linked with a return to Spain towards the end of last season.

Benitez has been linked with a possible move to the Far East for over 12 months, with Chinese club Dalian Yifang reported to have offered him a contract worth £12million a year.

But he has made it clear in the recent past that he sees his future in Europe, and ideally in the Premier League.

The club’s situation is further complicated as Ashley is in talks with several potential purchasers, including Dubai-based billionaire Sheikh Khaled Bin Zayed Al Nahyan, who claimed last month he had “agreed terms” with the Sports Direct magnate.