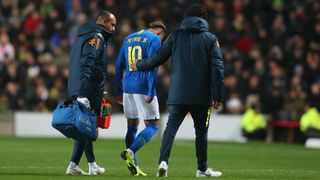 Paris Saint-Germain star Neymar believes the groin injury he suffered in Brazil's friendly with Cameroon is "nothing serious".

Neymar, 26, went off just eight minutes into his nation's 1-0 victory on Tuesday, sparking fears he may be sidelined for PSG's upcoming Champions League visit of Liverpool.

But the superstar forward echoed the thoughts of Brazil's team doctor, insisting the injury was not significant.

"We finished the year happy for the work done so far. These last games were important to recover from the biggest thud that was the World Cup," Neymar wrote on social media.

"We remain strong, concentrated and aiming to be better and better. Congratulations boys, for everything.

"Thanks to everyone who sent me messages wishing a good recovery. I think it was nothing serious."

PSG could be without Neymar for the Ligue 1 clash with Toulouse on Saturday, but will be hoping their talisman is available to face second-placed Liverpool four days later.