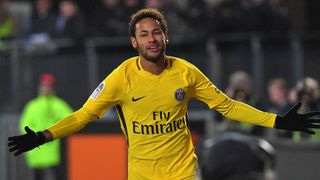 Paris Saint-Germain coach Unai Emery insisted the Ligue 1 giants would not be shaken by rumours Neymar is set to join Real Madrid.

Neymar, 25, is reportedly a major target for the LaLiga club despite having only joined PSG from Barcelona in a world-record move in August last year.

Edinson Cavani and Javier Pastore have already been punished by PSG after returning late from the mid-season break.

However, Emery said his team – who face Madrid in the last 16 of the Champions League – would not be distracted by rumours surrounding Neymar.

"The group is strong with a great mentality. They were strong when it came to both games in the Coupe de France and Coupe de la Ligue, and they remain like this in their preparation for the game against Real Madrid," he told a news conference.

"The players are smart and the club have gained experience. I also have experience and I know that people from outside can disrupt us... some people who may have some interest in doing so.

"For example, if you read today the first sport newspaper in Spain, the cover is that Neymar is going to Real Madrid. These things don't shake us.

"The players, the staff, the coach, the technical staff. We know our way, our path. We know who from outside... we know who wants destabilise us but we are strong, whatever has been told outside or what happens inside.

"We are protecting ourselves well. It's true that some little things happened after the holidays, but it's only 10 per cent [of the club].

"We'll come back soon to normality."

Neymar has made an impressive start to his PSG career, scoring 20 goals in 22 appearances in all competitions.

PSG hold a nine-point lead atop Ligue 1 ahead of a trip to Nantes on Sunday.