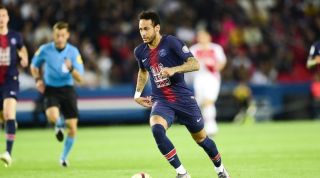 The Ligue 1 champions were furious with the Brazilian last week when he failed to turn up for pre-season fitness tests.

However, Neymar’s representatives have claimed that his employers were aware he would remain in Brazil for the world finals of the ‘Red Bull Neymar Jnr’s Five’ five-a-side tournament, which he hosts at an institute in his hometown every summer.

The Daily Mail reports that the forward was spotted catching a flight back to Paris from Sao Paulo on Sunday afternoon.

Neymar is expected to join up with his PSG team-mates on Monday, but is understood to be eager to return to Barcelona.

He left the Camp Nou in a world record £198 million deal two years ago, and PSG sporting director Leonardo has admitted that the La Liga side have made contact over a return, although their ability to fund a deal remains in doubt.

Barcelona last week secured the £108 million signing of Antoine Griezmann from Atletico Madrid and it is understood that they would need to sell Philippe Coutinho and Ousmane Dembele to raise the funds needed to bring Neymar back.

READ NEXTWhere Neymar has been going wrong for too long