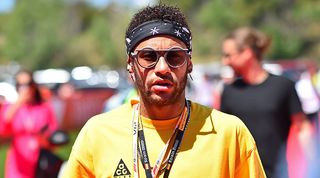 If the plan, when Neymar decided to leave Barcelona two summers ago, was to free himself from the club’s cultish collectivism, step out of Lionel Messi’s shadow and fulfil his destiny as the planet’s greatest footballer, it’s fair to say he’s still got some way to go.

For the second year running, as Paris Saint-Germain crashed out prematurely in the Champions League, Neymar was nowhere to be seen. His fragile fifth metatarsal accounted for both absences; a knack he could really have done without. Now he already wants to leave PSG, having failed to turn up for the first day of pre-season training. Sporting director Leonardo says he can, too, so long as "there is an offer that suits everyone".

But that's the thing. When your transfer has already broken football, where do you go from there? Neymar has never made a secret of his ambition to be named the world’s best player, but Brazil's golden boy is now 27 – the crunch age for an elite sportsperson; the point when any lingering talk of potential comes to a halt and the conversation turns to the notion of legacy.

It's almost worse that Brazil won the Copa America without him this summer – another major tournament for which he was sidelined, having hobbled out before the showpiece on home soil with an ankle ligament injury. The notion is a simple one: Tite's Seleção might just be better off as a collective without him.

It’s a good job Neymar still has few peak years ahead of him, because right now his legacy is not entirely positive. In fact, his career thus far could be spun as a cautionary tale for gifted young athletes: a story about how unchecked narcissism can undermine even the most glorious talent.

Perhaps the writing had been on the wall since the 2014 World Cup, when Neymar – who had hyped the home-turf tournament as his coronation – got injured in the quarter-finals. Lining up for the next game, his team-mates held aloft his shirt as though he had died rather than merely bruised his back, and were quickly given their comeuppance: one of sporting history’s most humiliating defeats. Far from conquering the world, Neymar had managed to turn his country’s fairytale World Cup into a horror story about the idiocy of the cult of the individual.

Within a year, thankfully, it seemed as though that self-indulgent streak was a thing of the past. As the 2014/15 season came to a close, Neymar had established himself as one-third of an all-time great attack, helping to fire Barcelona to a historic treble and been all but anointed as the Ballon d’Or winner-in-waiting. He was voted in at third behind Messi and Cristiano Ronaldo, both of whom were entering the home straight of their time at the top.

The following season, the Messi-Neymar-Suarez trident broke their own goalscoring record – reaching an absurd 131 in total – en route to the domestic double, and the year after that, Neymar stood tall when the going got tough, nudging Messi aside against PSG to orchestrate that comeback. His team’s season would end up being an underwhelming one but for Neymar, the pathway to greatness wasn’t so much ahead of him as being eaten up by his whirring feet.

Then came the fork in the road. A £194m, £600,000-a-week move to a superclub on the rise – and the chance to become the centrepiece of a side writing its own history – is an offer few footballers could turn down. And in itself, Neymar’s move to PSG was hardly madness. What has unfolded since, though, has looked increasingly like the lunatics taking over the asylum.

So far, Neymar’s PSG career has been a two-year rebuke to the idea that there’s no such thing as bad publicity. Reports from Paris have included (but are not limited to): Neymar’s star status splitting the dressing-room in half; PSG’s president offering Edinson Cavani a million euros to let Neymar take penalties; Neymar’s team-mates being instructed not to tackle him too hard in training; Neymar giving the symbolic finger to his disciplinarian manager by obliging him attend a lavish birthday bash; and Neymar’s contract featuring a €375,000 “ethical bonus” clause that involves applauding fans after matches.

And with his arrival having taken PSG no closer to Champions League contention, Neymar’s standing within the game has begun once again to wither. Perhaps being part of the best side in Europe was better for Neymar’s career than he thought.

On the one hand, a domestic treble, Ligue 1’s player of the year award, another title in 2018/19 and 51 goals in 58 games is not bad going for miserable failure. On the other, that list illustrates just what a hole PSG, with all their limitless billions, have dug themselves into. Their domestic titles have become inevitable to the point of irrelevance, while their holy grail, the Champions League, is a tournament whose winners must rely on things like apt timing, good fortune, luck of the draw and metatarsals staying intact at vital moments. PSG, in other words, have spent themselves into a situation where the only trophy that counts is the one that hinges on the unbuyable. First-world problems and all that, but let’s hope those at Qatar Sports Investments are at least able to chuckle at the irony.

As for Neymar, he may be cheered by the fact that the Messi-Ronaldo duopoly has indeed lost its grip on the Ballon d’Or for the first time in 11 years. Rather than scooting in to take the baton, though, he slipped in the voting from 3rd to 12th, while Luka Modric – a small, unassuming fish in a big pond – was given the gong for his selfless playmaking. If there is a moral here, it's that football's individual awards are the byproduct of success, not the definition of it.

To add further insult, Neymar is no longer the planet’s hottest property. That title has been claimed by his own team-mate, Kylian Mbappe, another quietly studious type and a man who spent the World Cup endearing himself to the watching world with a series of thrillingly no-nonsense attacking displays. It was Mbappe who top-scored in Ligue 1 last year; Mbappe who scooped the division's player-of-the-year prize.

In contrast, Neymar’s outings at the World Cup were jam-packed with nonsense and decidedly short on endearment: five games, two goals and a total of 14 minutes spent on the ground. His biggest impact was inspiring a viral craze for people to film themselves tumbling cartoonishly to the floor. The lasting impression, after all the play-acting and empty exhibitionism, was of an attention-seeker with a victim complex. “Neymar has charmed Brazil but annoyed the whole world,” wrote the Brazilian newspaper O Globo after his team met their fate in the quarters. A global annoyance: probably not the status Neymar had envisioned for himself as he enters the prime of his career.

It's a matter of debate whether all this is entirely the fault of Neymar himself, or simply the logical outcome when one man's ego is indulged to such a ludicrous extent. Certainly, he does not help himself with his dead-eyed determination to wring money out of his every predicament. Shortly after the World Cup, he appeared on Brazilian TV opening up about the diving accusations, his emotional “suffering” and tetchy relationship with the media. Then the big reveal: it was all an advert for razorblades.

It's easy to forget that buried somewhere in the middle of all this is a staggeringly talented footballer; one who attracts medals like a jam sandwich attracts ants and who could conceivably end his career on some sort of par with Pele, Romario and Ronaldo.

Equally, he is hardly the first footballer to choose to leave a successful team, and nor is he the first to be motivated by fame, money and personal accolades. But he is perhaps the first to do it all so nakedly, and to such obscenely lucrative ends.

Neymar is fast learning that profile and prestige are two very different things. The question for PSG now is whether they would be better off with him fit or at another club altogether.

IN PROFILE Edu at Arsenal: why Brazil’s general manager arrives with baggage in north London