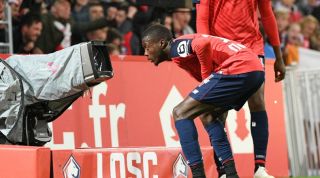 The French club have set a price tag of €65 million (around £58.5m) for the Ivory Coast international, according to the Telegraph.

Such a fee would comfortably surpass the record £45m spent on Gylfi Sigurdsson from Swansea two years ago.

The Goodison Park outfit have expressed interest in Pepe, but it is unclear if the club hierarchy are willing to meet Lille’s demands.

Liverpool have also been linked with the player, who is currently on international duty at the African Cup of Nations.

Pepe scored 22 Ligue 1 goals last season, second only to Kylian Mbappe, to help his side manage a surprise second-place finish.

Ajax winger David Neres, Lyon’s Bertrand Traore and Malcom of Barcelona are other options for Marco Silva as the Toffees boss looks to bring in a new left-footed right winger.