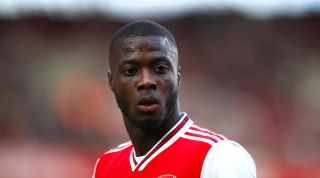 Mikel Arteta is confident that Nicolas Pepe will be a success at Arsenal despite a slow start to his Premier League career.

The Gunners broke their transfer record to sign the Ivory Coast international for £72m last summer.

Pepe has impressed in patches but has struggled to find consistency, having scored only three goals and provided three assists in the top flight.

And Arteta has called for patience and explained why he believes Pepe deserves more time to prove himself.

“I hope we can see it from now to the end of the season,” he said.

“But if you go through the list of top players that have come to this country, how disappointing they were for the first ten to 12 months then how incredible they were for the next five years, I think we could have a massive list.

“It’s not easy to adapt to this league but he’s putting in the effort and he’s willing to do it. And it will come out.

“The price that we paid for him puts him in a difficult position straight away because he’s going to be compared to players of that calibre.

“First of all the team has to sustain his ability and give him as many opportunities as possible during games for him to be able to execute his qualities.

“The other thing is he has his own responsibility, that’s for sure. He has to be more consistent in his performances.

“That’s part of the adaptation for sure,” Arteta added when asked if Pepe's confidence had dropped. “He was in France and was one of the biggest stars in the league.

“He made an incredible year, then he comes here and a lot of people didn’t even know him and you paid that price tag.

“So for him to put his brain into this picture and solve all this is not easy. And he’s a really young player.”