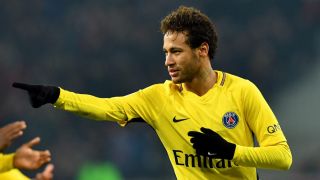 Real Madrid defender Dani Carvajal said there was no "magic formula" to stop Neymar as he hoped the Paris Saint-Germain star would have an off day.

Neymar shapes as a huge threat to Madrid as PSG prepare to visit the Santiago Bernabeu for the first leg of the Champions League last-16 tie on Wednesday.

Carvajal, who is suspended for the opening clash, said his team simply needed to hope the Brazil international was below his best.

"To play against Neymar, there is no magic formula," he said, via AS.

Having struggled in LaLiga this season, the Champions League is set to be Madrid's last chance at another trophy this campaign.

Carvajal insisted there were no favourites for the tie against PSG, who are flying high in Ligue 1.

"There is no favourite in a battle like that. The knockout stages are very even, they are decided on little details," he said.

"We will try to not commit any errors and to get it right in the area."