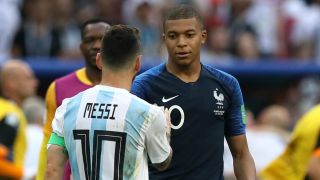 He starred at the World Cup and now Paris Saint-Germain ace Kylian Mbappe has ranked himself a stronger Ballon d'Or contender than Lionel Messi.

France forward Mbappe, 19, scooped the FIFA Young Player award in Russia as his country were crowned champions earlier this month.

The teenager's exceptional run of performances could see him come into contention for European football's most coveted individual prize, which has been shared between Messi and Cristiano Ronaldo for the last decade.

Mbappe, however, found no place for the former when asked by France Football to name his favourites for this year's honour.

"To complete it, I think I would put myself in there too," he added.

The forward's recognition of Neymar came soon after the Brazil star spoke highly of the pair's relationship.

While the attackers are set to battle it out for top billing at PSG, Mbappe insisted they remain on the same wavelength.

"Not much will change in our collaboration and cohabitation. Things are clear between us," he said.