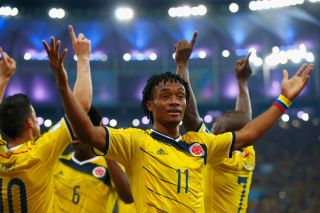 Cuadrado's representative Alessandro Lucci admitted he had held informal negotiations with a several clubs - including Spanish giants Barca - but added that his client is happy in Florence.

Manchester United have also been linked with a move for the 26-year-old, who shone in Colombia's run to the World Cup quarter-finals.

But Lucci reiterated comments made by Fiorentina sporting director Daniele Prade, who claimed no bids had been received for Cuadrado on Tuesday.

"We have been talking with Barcelona as well as other clubs for a while," Lucci told Tuttomercatoweb. "We have noted a lot of interest but, as of today, there are no official talks, not with Barcelona or any other club.

"Barcelona is represented by very serious professionals that in our conversations have never, let me repeat it, never talked about using dodgy strategies.

"I'll take the chance to clear out things on another subject.

"The relationship we have with all at Fiorentina, personal and professional, both for me and for Cuadrado, is exceedingly good.

"Should there be in the near future some important, first level, talks we will sit down, analyse the pro and cons and close the deal to the maximum satisfaction of all parties involved."