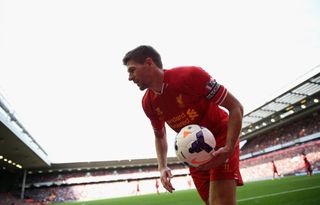 The 33-year-old midfielder made way for Joe Allen midway through the second half of Liverpool's 4-0 Premier League win over Fulham on Saturday, having laid on three of the goals.

Rodgers revealed after the match that Gerrard was nursing a hip complaint, but insisted the decision to withdraw him was largely precautionary.

"He's obviously had a wee issue with his hip but it's something that I’ve got with him – where I can rest him in games I will do," Rodgers explained.

"I thought we should have enough control over the game in order to do that.

"He's a more-than-seasoned professional at the top level, so where he can get those little breathers, I think it’s important for him.

"We haven't spoken to the medical guys yet but he should be fine."

Liverpool's first two goals came courtesy of superb set-piece deliveries from Gerrard – an asset Rodgers is pleased to see his high-flying side putting to good use.

"After I'd been in here and assessed and looked at Steven, I felt that his delivery is as good as it gets," he added.

"There's no one who delivers a ball like Steven Gerrard and I felt that the other players were not utilising the quality that we have in the team in his delivery.

"I've just asked them to be much more aggressive when they go and attack the ball and try and win the battle with your defender - get across him, use your arms – because he delivers it exactly every single week. I ask him where to put the ball and he puts it there.

"You've seen in the two goals, the free-kick and the corner, incredible quality on his delivery."