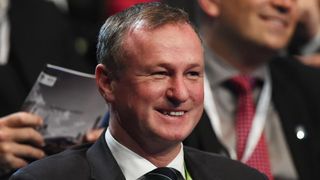 Northern Ireland manager Michael O'Neill was in an upbeat mood despite seeing his side drawn against Germany, Poland and Ukraine in the Euro 2016 finals.

O'Neill's men will face Poland in their Group C opener at the Allianz Riviera in Nice on June 12 before taking on Ukraine in Lyon and world champions Germany at Parc des Princes in Paris.

It promises to be a stern test for Northern Ireland's defence, which will come up against the top scorer in qualifying in Poland's Robert Lewandowski and his Bayern Munich team-mate Thomas Muller.

Lewandowski was on target 13 times for Poland in qualification, while Germany's Muller found the net on eight occasions.

O'Neill told BBC Sport: "Both showed what they're capable of qualification. In many ways it's a good test for us, we have three Premier League centre-backs in our squad, it's a good challenge to go against Muller and Lewandowski.

"Having watched tournament football, the most important thing is to try and take something from your first game because then you're up against it.

"The fixtures work in our favour because we have to play Poland and Ukraine before Germany.

"Come June we'll definitely be ready to play. It's a perfect opportunity for us. Everyone's looking forward to it."