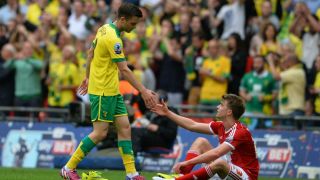 New signing Patrick Bamford could make his Norwich City debut against Tottenham at Carrow Road in Tuesday's Premier League clash and the striker is eager to make up for lost time.

The 22-year-old moved to Norwich on loan from Chelsea on Saturday, having spent the season at Crystal Palace before agreeing an early termination of his contract at Selhurst Park.

Bamford's spell at Palace - his fourth away from Stamford Bridge - saw limited game time but he will now be tasked with aiding Norwich's bid for survival after four consecutive defeats in all competitions.

Alex Neil's men sit two points off the drop zone in 17th after their breathless 5-4 defeat to Liverpool last weekend but Bamford - who played for Middlesbrough against Norwich in last season's Championship play-off final - is confident he can hit the ground running.

"The most important thing for me now is to get back playing," he told the club's official website. "I've had six months of limited action, which is in stark contrast to last season [at Middlesbrough].

"I've watched the team a few times this season and they've been playing really well while creating a lot of chances. For me, that was a key thing; sticking to their motto of how they want to play.

"Most of the boys probably already know me, having played against them three times [in the Championship] last year. Things like that always help with the settling in process, and the quicker I'm able to bed in the easier it will be start contributing to the team."

Norwich enjoyed an extended rest this weekend due to their absence from the FA Cup fourth round and could welcome back midfielder Alex Tettey from illness.

Mauricio Pochettino's men came through their FA Cup trip to Colchester United with a 4-1 win on Saturday and are now 10 unbeaten on the road in all competitions.

Their trip to Norfolk begins a month that includes four Premier League games, an FA Cup tie and a two-legged Europa League test, with Pochettino warning of a difficult challenge in midweek.

"It's important to have the right mentality, we expect a tough game," he told Spurs' official website. "It's a good time but we need to fight, you always know it's difficult but we are in a good moment and we need to keep working hard.

"I'm sure we're ready to compete. Norwich showed quality to score four [against Liverpool], yes they conceded five, but every game is different and we expect a very tough game. They have a very good team."