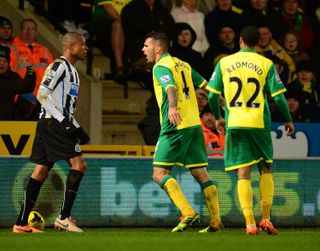 The midfielder was dismissed by referee Chris Foy after an 82nd-minute altercation with Loic Remy during the goalless draw, with the Newcastle forward also sent off for his part in the incident.

Norwich boss Chris Hughton labelled the decision as "incredibly soft" after the two players touched heads and shoved each other away.

A straight red card would see Johnson miss three matches for the Premier League strugglers, but Norwich are attempting to get it overturned by the Football Association.

"We can confirm that the club have appealed against the red card received by midfielder Bradley Johnson in the 82nd minute of Tuesday's 0-0 draw with Newcastle United," a Norwich club statement read.

On the incident, Hughton said: "I had a very good view of the incident where Remy leant his head into Bradley Johnson.

"But probably more for me to speak about is the Bradley Johnson sending off, which I thought was incredibly soft.

"I presumed when I saw he'd been sent off that something else had happened, apart from what I did see, which was him push Loic Remy in the chest. But no, apparently he was sent off for that incident.