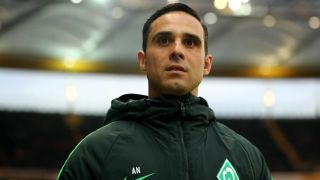 Werder Bremen have agreed a new deal with Alexander Nouri that will see him remain as head coach at the Bundesliga club.

Nouri replaced Viktor Skripnik in September after Bremen had lost their first three matches, initially on an interim basis and then on a permanent deal until the end of the season.

The 37-year-old has taken them from the bottom of the table up to eighth, with a Europa League spot still possible going into Saturday's final match of the season away to Borussia Dortmund.

That form has seen Nouri rewarded with a new contract, the length of which has not been announced.

"Even in February when results weren't going our way, I was certain that my journey with Werder was not over," Nouri told the club's website.

"I always had the feeling it would continue. I'm pleased with the faith that the club has placed in me, the support of the fans and the passionate and hungry team."

45 - Only Bayern, Leipzig, Hoffenheim and Dortmund collected more points than since Alexander took over. Extension. May 15, 2017

Sporting director Frank Baumann added: "We have sat down together over the last few weeks and discussed many important things about continuing to work together long term.

"We are delighted to be able to confirm that we will continue our partnership.

"Alex took over the team in the autumn and, at the time, we needed him to get us out of a difficult situation.

"He has done that brilliantly. In the second half of the season he has led us up the table one step at a time. Therefore, we want to extend the contract and continue to develop Werder further."

Nouri has also served as assistant manager and reserve team boss since his arrival at the club in 2014.