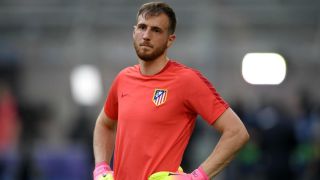 Atletico Madrid goalkeeper Jan Oblak says he would consider a move away from the club, but not until 2018.

The 24-year-old has established himself as one of Europe's finest young keepers during the three years since his transfer from Benfica in 2014.

Oblak signed a new five-year contract last February that reportedly contains a €100million release clause, which Ligue 1 giants Paris Saint-Germain are said to be prepared to activate in order to bring him to Parc des Princes.

The Slovenia international says he is committed to Atleti for 2017-18 but will not rule out the prospect of an exit next year.

"I'm an Atletico player and I will be until the end of the season. After that, I don't know, we'll see," he said, as quoted by Marca.

"You never know. Sometimes things change from one day to the next. For now, I only talk about Atletico, where I'm happy.

"I've said that I will stay for at least one more season. I hope we have a good campaign."

50% - Jan Oblak has saved 4 of the 8 penalties he has faced for Atletico in all comps (exc. friendlies and penalty shootouts). Guardian. August 1, 2017