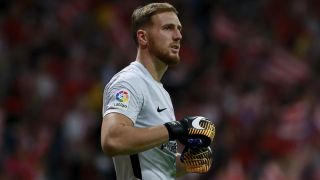 Atletico Madrid goalkeeper Jan Oblak said "nobody knows" what will happen in the future as the Slovenian star insisted he is only focused on ending the season with silverware.

Oblak has been linked with Premier League side Liverpool and Ligue 1 champions Paris Saint-Germain previously following his exploits for Atletico.

The 25-year-old – who moved to Madrid from Benfica in 2014 – has helped Atletico up to second in LaLiga, while the Spanish outfit are preparing for their Europa League semi-final showdown with Arsenal.

However, Oblak did little to allay doubts over his future after Sunday's goalless draw against Real Betis.

"No news. I have the contract that I signed two years ago," Oblak told reporters.

"What will happen well nobody knows, not even me. I prefer to finish the season well and hopefully with a title. Then we'll see but I have a contract. I do not think of anything other than Atletico."

Oblak added: "Atletico can grow. They have grown a lot and surely will not stop now, although it is not easy.

"I am sure that Atletico will grow and we will see what will happen to me, for the moment I am here. I have a contract until 2021. If I continue, we will grow together and if not, the club will grow as well."