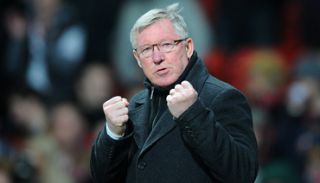 Ferguson will take his seat in the dugout for the final time with Swansea City the visitors for his home farewell after the Scot announced on Wednesday that he will step down at the end of the season following more than 26 trophy-laden years at the helm.

Fans unable to get a ticket will be able to line the streets and toast the Scot on Monday evening when United embark on an open-top bus parade through the city.

After that, Ferguson will bow out at West Bromwich Albion on the final day of the season.

While there is nothing at stake from Swansea's visit, United having long since sealed a 20th English title and their opponents set for a top-10 finish, the battle for the remaining two Champions League places and one relegation spot is guaranteed another twist or two in the dying embers of the season.

Chelsea (69 points), Arsenal (67) and Tottenham Hotspur (66) remain in the mix, with last season's European champions Chelsea missing the chance to all but guarantee a top-four finish when they were twice pegged back by Spurs in a 2-2 draw on Wednesday.

They get another chance when they visit resurgent Aston Villa on Saturday, Paul Lambert's side having revenge firmly on their minds after an 8-0 mauling by Chelsea in December.

Spurs visit Stoke City on Sunday while Arsenal, not in action at the weekend, face relegation-threatened Wigan Athletic at Emirates Stadium on Tuesday.

Wigan's build-up to their first FA Cup final appearance against Manchester City on Saturday would have been far more relaxed had they managed to hold on to a 2-1 lead against Swansea on Tuesday.

Instead, Roberto Martinez's side imploded to lose 3-2 and their perennial Houdini act of escaping the trapdoor is now in serious jeopardy.

Wigan's defeat, which kept them third from bottom on 35 points, will have been greeted by relief by the teams above them with Newcastle, Norwich and Sunderland holding a three-point cushion with two games to play.

Southampton, on 39, and Aston Villa and Fulham with 40 are not yet assured of safety.

One win from their last seven games has plunged Newcastle into a dogfight that has left fans contemplating the spectre of a second demotion in five seasons after they were demoted in 2009.

Newcastle visit already-relegated QPR on Sunday having produced an improved display in a 0-0 draw at West Ham United last weekend.

After conceding 10 goals in three games, including six in the embarrassing 6-0 home rout by Liverpool, a clean sheet owed much to the return of captain and centre-back Fabricio Coloccini from injury after a 12-match absence.

Norwich host West Bromwich Albion while Sunderland welcome Southampton for a game manager Paolo Di Canio has described as like a "Champions League final for us."