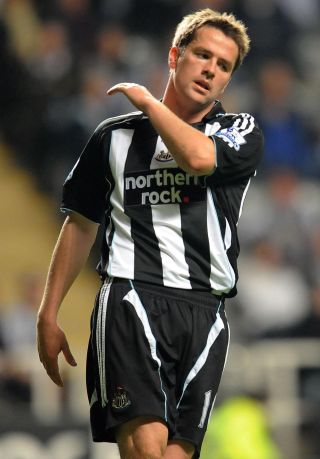 Michael Owen was poised to return to the Premier League following his Spanish sojourn after Newcastle clinched a shock deal to sign the England striker from Real Madrid on August 30, 2005.

Nearly a decade after investing a then world record £15million to bring Alan Shearer to Tyneside from Blackburn, the Magpies eclipsed that figure to agree a deal for Owen from under the noses of his former club Liverpool.

The reaction in Newcastle was a mix of stunned surprise and delight, and there was expectation of a glut of goals after they had drawn a blank in the opening four games of the 2005-06 Premier League season.

Twelve months after missing out on Wayne Rooney to Manchester United and a year on from chairman Freddy Shepherd sacking manager Sir Bobby Robson, Newcastle boss Graeme Souness was given the news he had been yearning for.

“Bringing Michael to St James’ Park will rank alongside the signing of Alan Shearer as my proudest moment at Newcastle United,” Shepherd said.

“Newcastle fans love centre-forwards and Michael is a fantastic goalscorer. He’s someone we would love to build the team around and we hope he can help us bring success to the club.”

Expectation failed to match reality at St James’ Park as a succession of injuries restricted Owen to just 79 appearances in four years, although he scored a more than respectable 30 goals.

However, he never truly settled in the north-east and he admitted last year in his book ‘Reboot – My Life, My Time’ that swapping Madrid for Newcastle was a “downward step” and the “one I really regret”.

He added: “I should have followed my gut instincts. I didn’t want to go there – my heart was set on a return to Liverpool.”

Owen left Newcastle in the summer of 2009 following their relegation to the Championship, signing for Manchester United on a free transfer.