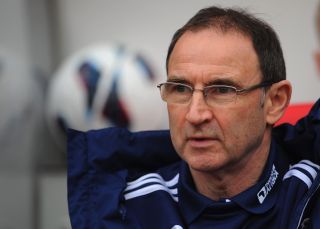 The position has been vacant since Giovanni Trapattoni left his role following defeat to Austria in a FIFA World Cup qualifier in September, with Noel King taking charge of the country's last two fixtures of a poor campaign that saw them fail to reach Brazil 2014.

O'Neill has been out of work since leaving Premier League side Sunderland last season and looks set to take his first step into international management alongside former Ireland captain Keane.

The Football Association of Ireland stated on their Twitter account on Tuesday: "We can confirm that the management appointment process with Martin O'Neill & Roy Keane is at an advanced stage."

The FAI's chief executive officer, John Delaney, added: "Detailed discussions with Martin and Roy are advanced. We hope to have things signed by Saturday."

ALSO ONLINEKeane urged to reveal where he buried Haaland