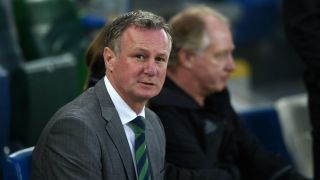 A trio of goals in the final 20 minutes – including a Josh Magennis brace – gave the scoreline a convincing look, but the visitors had toiled prior to the opener despite a series of chances.

However, O'Neill was pleased with the way his side kept plugging away to earn a potentially vital three points.

"There's obviously a sense of relief," he told Sky Sports. "We were so dominant – from the first whistle to the last – but when you have nothing to show for it at half-time, you worry that you will get a little bit anxious.

"But, to be fair, we didn't. Throughout, we played very well, with good intensity. The supporters played a big part in that – we had a big crowd, which helped.

"It was just a case of making the breakthrough. We did everything but score in the first half, but once we got that first goal we were comfortable."

The turned out in force! Enjoy celebrating the three points & see you all on Monday! September 1, 2017

Now, Northern Ireland need just a point at home to Czech Republic – who lost 2-1 at home to Germany – to secure a top-two spot in Group C and O'Neill is looking forward to a huge game on Monday.

"The incentive is massive," he added. "We need to make sure that we don't lose the game, but obviously our objective is to go and try to win the game.

"The big thing [at San Marino] was that we got through the game with no cards, so we didn't lose anyone to suspension, nor did we lose anyone to injury.

"How they played will give them great confidence and they're looking forward to the game on Monday."

Magennis was denied a first international hat-trick as Steven Davis converted a late penalty, but the Charlton Athletic man had no hard feelings towards his captain.

"Of course I asked for the penalty, but he's the captain," said Magennis. "What he says goes. There's no agendas.

"It would have been nice to get my first hat-trick, but as long as we won – and we did – I'm happy for him to get his goal because he deserves it."