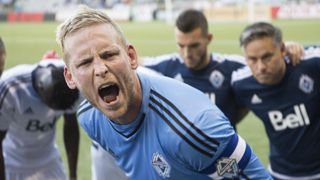 VANCOUVER – It was a busy Tuesday in the Vancouver Whitecaps’ preseason. After first announcing the acquisition of striker Blas Perez from FC Dallas, the Blue and White locked down a big piece to their squad by signing starting goalkeeper David Ousted to a multi-year contract extension.

With the Danish shot-stopper entering his option year in 2016, Whitecaps head coach Carl Robinson was keen to secure the Scandinavian’s services beyond the new season to come. Ousted follows center back Kendall Waston and defensive midfielder Matías Laba in signing a contract extension on Canada’s west coast.

“David is one of our leaders in this club and re-signing him was a top priority,” Robinson said in a club statement. “He's an integral part of the spine of the team, a character guy in the locker room, and since he joined us, he has proven time and time again that he is one of the best, if not the best, goalkeeper in the league. We're thrilled to have him in Vancouver for the long term.”

Ousted’s performances over the last two seasons have made him one of the best goalkeepers in MLS, having twice set the league high for clean sheets with 13. The 31-year-old’s efforts last season earned him a selection in the MLS All-Star Game and a second-place finish in voting for MLS Goalkeeper of the Year. He has played every MLS minute in goal for Vancouver making his debut on Aug. 3, 2013.

“Vancouver has become a second home for my family,” Ousted said. “I am thankful to the fans and club for the commitment and support they have provided since we arrived two-and-a-half years ago. I am proud of what we have been able to accomplish and excited about what the future holds.”

With Ousted’s future sorted, it remains to be seen if Robinson will add more experience to his goalkeeping ranks. Presently, Canadian youngster Marco Carducci, Whitecaps FC 2 shot-stopper Spencer Richey, and former Whitecaps Residency product Sean Melvin are in preseason camp with Vancouver. Former back-up Paolo Tornaghi is also training with the Blue and White in Vancouver this week.