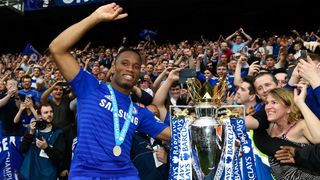 Didier Drogba announced his retirement from football at the age of 40 on Wednesday.

The former Ivory Coast international spent nine seasons at Chelsea across two spells, picking up 12 major honours along the way, including four league titles and the 2012 Champions League.

He is the highest scoring African player in Premier League history, and the only man to reach three figures, finishing his career with 104 goals from 254 appearances in English football's top flight.

But who are the other men from his continent trailing in his wake? With the help of Opta, Omnisport provides a run-down...

The Togolese enjoyed spells at Arsenal, Manchester City, Tottenham and Crystal Palace and famously infuriated Gunners fans when running the full length of the Etihad Stadium pitch to celebrate a goal for City against his former employers.

'The Yak' carved out a reputation as a deadly finisher and counts Portsmouth, Middlesbrough and Everton among his numerous clubs. His penalty taking technique is perhaps best described as "relaxed".

Almost single-handedly inspired Man City to the title in 2013-14, scoring an astonishing 20 league goals from midfield. Famed for his bulldozing runs, Toure was given a hero's farewell at the Etihad at the end of last season.

The Nigerian with size 15 feet was part of Arsenal's double-winning side in 2001-02 and 'The Invincibles' campaign two years later. His personal Premier League highlight was a hat-trick in the last 15 minutes as the Gunners came from two down at Chelsea to win 3-2 in October 1999.

The first player to score four goals in a Premier League game, for Norwich City in a 5-1 thrashing of Everton in September 1993.

Reached the milestone with a brace in Liverpool's 4-1 defeat of Cardiff City last month. Mane has become part of the Reds' fearsome attacking trident alongside Roberto Firmino and another man who features further down this list...

The second-best goals-to-games ratio of all the men in this selection, Ba turned out for West Ham, Newcastle United and Chelsea and struck up a fruitful partnership with compatriot Papiss Cisse at St James' Park, scoring 50 league goals between them across 2011-12 and 12-13.

The 2007 African Footballer of the Year spent five seasons in London with West Ham and Spurs at the turn of the century, before a prolific spell in Sevilla that delivered back-to-back UEFA Cup crowns, Kanoute scoring in both finals.

Having arrived at Leicester City as a relative unknown from Le Havre, Mahrez played a huge part in the Foxes' sensational 2015-16 Premier League triumph, scoring 17 goals and assisting 11 more. Has since secured a long yearned-for move to Manchester City.

Ameobi made all bar four of his Premier League appearances with Newcastle United. The local boy never quite managed double figures in a campaign - a best return of nine in 2005-06 - but was something of a cult hero among the Magpies faithful.

'The Egyptian King' never managed to nail down a first-team place at Chelsea, but after a spell in Serie A, returned in style last season. His 32 goals - a record for a 38-game Premier League campaign - will be hard to beat.