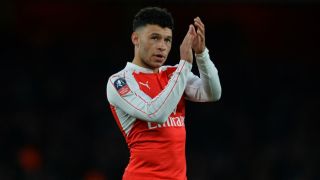 Alex Oxlade-Chamberlain netted a late equaliser to help Arsenal to a 1-1 draw against Lens in their first pre-season game.

Arsene Wenger opted to field a combination of experienced first-team players, such as Per Mertesacker, Nacho Monreal, Francis Coquelin and Theo Walcott, with promising youngsters like Alex Iwobi, Chuba Akpom and Jeff Reine-Adelaide.

It was Akpom who got the first chance for Arsenal early on, but the attacker had his shot saved by Lens goalkeeper Nicolas Douchez.

The Ligue 2 side then had a sight of goal courtesy of Abdellah Zoubir, only for the midfielder to fire just wide.

Mathias Autret then opened the scoring for the French side after tapping home from close range after some unconvincing defending from Calum Chambers.

Wenger made six changes for the second half - Joel Campbell, Kieran Gibbs and Oxlade-Chamberlain among those coming on.

Substitute goalkeeper Matt Macey showed his quality in the 64th minute with a superb save to deny Benjamin Bourigeaud.

Walcott could have levelled the scoring with 15 minutes left on the clock after some good work from Oxlade-Chamberlain, but the England international had his shot tipped wide.

There would be a late equaliser after all, though, as Oxlade-Chamberlain delicately chipped the ball into the top corner after a sublime throughball from Serge Gnabry to salvage a draw.