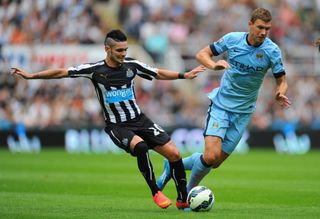 Cabella was superb in his Premier League debut at St James' Park on Sunday, as Newcastle competed well with City.

The France international, who joined from Montpellier last month, posed a constant threat in a game the visitors won thanks to goals in each half from David Silva and Sergio Aguero.

And Cabella's efforts did not go un-noticed, with Newcastle boss Pardew lauding him and fellow debutant Jack Colback.

"I thought Jack and Remy were outstanding," he said.

"You know Remy is going to try something and have a moment. When Remy has a hot day, he is going to punish teams.

"He is a little bit like [Samir] Nasri and Silva for Man City - he has that quality on the corner of the boxes to take that extra second to make the pass.

"I was really pleased with him. I thought he might struggle physically but he coped quite well."

Pardew's words on Cabella summed up his upbeat tone following a match that suggested Newcastle's poor form in the second half of the previous campaign are a distant memory.

"We had a difficult end to last season but there were a lot of things about our performance that bodes well," he added.

"We have come up against individuals that we are not going to see all season and I thought we coped with it as well as we could have.

"When you play the top teams you need a break and we didn't get that. I am as pleased as I can be with a 2-0 defeat."