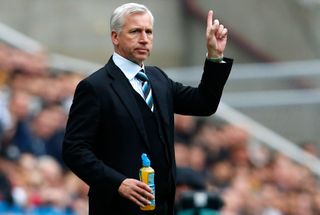 Pardew's men face City at St James' Park on Wednesday as they bid to reach the quarter-finals and maintain their quest for a first major trophy since 1969.

Newcastle approach the game following a 2-1 loss to Sunderland in the Tyne-Wear derby last Sunday.

That defeat marked the first time that Newcastle have been beaten by their local rivals in consecutive games for 46 years.

Pardew was angered by the manner of that setback, and urged his players to produce an "aggressive" performance against Manuel Pellegrini's men.

"There is a bit of anger in me that we did not win the Sunderland game," he said.

"A couple of silly mistakes cost us, that's what I was angry about.

"Not the attitude of the players or their application, but it is about concentration and professionalism.

"I want to take that anger into Man City and hope my players do too, but in the right manner because we need to find the right solution to win the game.

"We need to have that extra bit of aggression in our play."