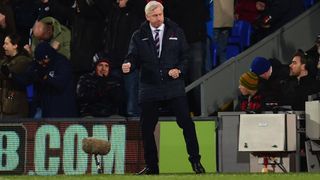 Pardew's first Premier League game in charge of Palace appeared likely to end in defeat when in-form Tottenham striker Harry Kane broke the deadlock four minutes into the second half.

However, Dwight Gayle levelled with a 69th-minute penalty after Benjamin Stambouli had made a rash challenge on Joe Ledley and Jason Puncheon drilled home a rapturously received winner 10 minutes from time at Selhurst Park.

Puncheon's strike was laid on by Zaha, who came on in the 74th minute and proceeded to give the Tottenham defence – and full-back Kyle Walker in particular – a torrid time.

"I just felt that we needed a bit more maverick behaviour in the team and that was the reason for the sub at half-time," said Pardew.

"That helped us and then Wilfried came and gave us exactly the reaction I was looking for.

"I left him out, if I'm honest, because I wanted to see what his reaction would be like. This is a boy who I think his confidence needs to be rekindled.

"That will do him no harm today – that 20 minutes was electrifying."

A first win in nine league games lifted Palace out of the relegation zone and Pardew was pleased to see some of the qualities that saw the club achieve top-flight survival last season on display.

"If I could pay a credit to [former manager] Tony Pulis, really – the team in the last 15 minutes, 20 minutes looked like the team from last year," he added.

"You have to understand that in this game it's not just straight lines, eating the right food and turning up on time.

"You also need to have a bit of maverick behaviour in there somewhere. This team needs a bit of that and fortunately we found that just in time.

"Sometimes just results [don't go well], you get a little bit negative in your thinking and your maverick players become a bit too sensible. You've got to get the balance right and second-half I thought we did."