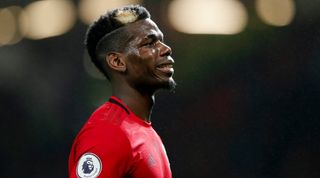 Paul Pogba could leave Manchester United this summer and return to Juventus, according to his agent Mino Raiola.

The Guardian reports that both the Italian Champions and Real Madrid are interested in signing Pogba, who will enter the final year of his current contract this summer.

The France international is also keen to leave Old Trafford, but Man United have set an asking price of £83m for the midfielder. Both Juve and Madrid consider this fee to be too high.

If Pogba does move on this summer, then Raiola says a return to Turin is the preferred destination for his client.

"Pogba feels at home in Italy. Italy is like his second home or family, same for (Zlatan) Ibrahimovic. That's why Paul would like to come back to Juventus," he said.

"But we'll go to speak about that just after Euro 2020. Pogba wants to play at the best levels always ... but he can't escape Manchester United now, in this moment where the club is not having a good period."

Pogba has only made eight appearances in all competitions this season and has not played at all since Boxing Day because of injury.

It is understood the 26-year-old is close to returning to full fitness, though. United are hoping that Pogba will have a good end to the campaign and then impress at Euro 2020, therefore strengthening their position of negotiation.

Raiola is also set to meet with the club's hierarchy to discuss the possibility of a contract extension. If the potential offer doesn't meet expectations then he is expected to inform them Pogba intends to leave.