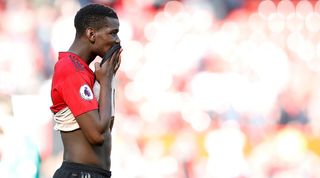 The Frenchman was keen on a move to Real Madrid over the summer but the Premier League side stood firm in insisting he wasn’t for sale.

But Scholes has questioned whether it may be best for United to cut their losses after being unimpressed by the former Juventus star’s form in England.

“I think it’s quite clear he wants to leave the club,” he told talkSPORT.

“He wanted to move to Real Madrid [in the summer] and for whatever reason it didn’t happen.

“If they ask him to stay for a year then we’ll see what happens. But I don’t think it will be a big loss to United [if he does go].

“At the end of the day his form hasn’t been great anyway over the last two or three years he’s been there.

“I’m sure there’s more players there who can step in and do just as good a job.”