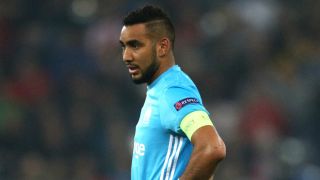 Marseille star Dimitri Payet is confident he will be fit for Wednesday's Europa League final.

The 31-year-old was left out of Friday's 3-3 Ligue 1 draw with Guingamp as a precaution, having reportedly picked up a slight muscle problem.

Payet is optimistic he has enough time to recover but says he will need to be cautious in training if he is to be ready for the showdown with Atletico Madrid in Lyon.

"I had a little discomfort before Guingamp," Payet told Telefoot. "In order not to make it worse, we preferred for me to sit out.

"It's not something innocuous; I'll have to be very careful before Wednesday. [But] you have to be confident."

In Payet's absence, Marseille surrendered a 2-0 lead to fall 3-2 behind to Guingamp and saw goalkeeper Steve Mandanda sent off, only for Florian Thauvin to rescue a point.

Winger Thauvin, who set up Valere Germain's first goal and also headed in their second, has now scored 22 goals in Ligue 1 in a hugely impressive season.

Atletico and Bayern Munich have been linked with the former Newcastle United man, but he has made it clear he plans to stay at the club for next term.