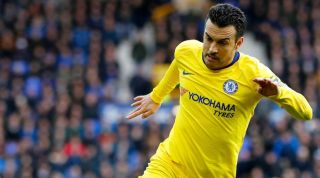 As Pedro prepares to enter the last six months of his contract at Chelsea, he looks to be pushing for a return to his former club in Spain.

According to Goal, Pedro has said he would "drop everything" if Barcelona were to call him and offer him another spell at the club.

He has also revealed that he could have returned in the summer, but the move was swiftly called off:

"There was a moment in pre-season when we played against Barca that, after talking with the coach, I saw a chance, but the door closed quickly.

"At this point, I don't know what will happen to me, just that I'm contracted to Chelsea until the end of the season."

Pedro joined Chelsea at the beginning of the 2015-16 season for a fee of £19m, despite renewing his Barcelona contract earlier that year. On his decision to leave, he said:

"I left Barcelona because I was brave. Neymar arrived and I played less. These things happen in football."

Pedro was also asked about rumours that he would move across London to join West Ham, replying:

"I don't know, we'll see. What I know is that I want to continue having fun playing football."

The Spaniard has been in and out of the Chelsea side this season as Frank Lampard has favoured young players like Christian Pulisic, Mason Mount and Callum Hudson-Odoi. The excellent form of Willian has also been detrimental to Pedro's playing time.

It does look likely that this season will be Pedro's last at Stamford Bridge, but it remains to be seen whether Barcelona will offer him a way out in January, or whether he'll have to wait until the summer.

What happened to football on Christmas Day? The lost history of a Victorian tradition