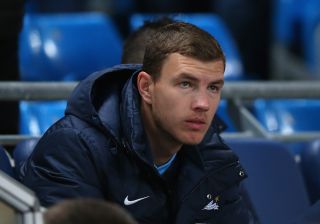 The Bosnia-Herzegovina international striker has been linked with a host of clubs across Europe – including the likes of Inter, Borussia Dortmund and Arsenal – after struggling to hold down a first-team place at the Etihad Stadium.

Alvaro Negredo's arrival during the close-season and the form of Sergio Aguero has meant the 27-year-old has only started four games in the Premier League and three in the UEFA Champions League under Pellegrini.

Dzeko has scored three league goals with a further two in the UEFA Champions League and Pellegrini believes he still has a role to play.

"It is very important for this club to have a good squad because we have a lot of games to play from now until April and, if we want to win trophies, we need important players.

"Maybe at the moment he is not playing as much as he would like, but he remains an important part of the squad."